Hi Daniel! As a Pixel Federation veteran, you surely remember the time when the idea to create a game about trains was born. Could you describe the background that lead the team towards the creation of TrainStation as well as the team's spirit?

Sure! At the time, Pixel Federation consisted of about 20 people. That was in 2009: the third generation of iPhones just came out and every radio was blasting Lady Gaga's Pokerface. Google Chrome had existed for only about a few months, yet it already had an astonishing 3,9% share on the browser market...

Pixel had been going through a rough time, but after we got funded, we didn't have to resort to contract work only.

Back then, we were focused on creating web sites, but we hoped to make games as well: we had finished 2 projects for Nintendo DS (Libera Wing, Happy Birthday Mart), 2 iPhone games (3bot, Bowling Party), and Emporea had been running exclusively on a German game portal, but the publisher didn't give it any attention and player numbers were at a standstill.

Money was sinking into developing a project that wasn't able to sustain the firm.

Then, Šimon (Šimon Šicko, one of 4 co-founders and current CEO of Pixel Federation) came up with the idea to make a game about trains. He conceived a document about the game's aim and we began to work on visuals and game design and simultaneously researched whether there had been anything similar on the market. Lucky Train was on the rise at that time, an isometric game about developing a city and sending trains between friends - playing it was mandatory :)

So the initial concept was clear as there was an apparent inspiration. In what way should TrainStation differ from the competition, what was the plan to spark players' interest?

If your budget is limited, you won't attempt to reinvent the wheel.

On the contrary, we started with a safe concept – of course enriched by our original ideas. The original version of TrainStation (the working title was Trainz) was to be isometric where the player would also build railways like in Transport Tycoon. We began to develop first concepts of locomotives in 3D. We had been devoted to 3D development for a few weeks, but concerns sprung up quickly – we're developing a game that is going to be very similar to an already existing one... It is about trains, but the trains aren't as prominent as they should be, there are too few details. The modeling of the engines was very time-consuming and the isometric view caused a lot of problems. But then, our former game designer Thomas came up with a very controversial idea. He had been playing a Facebook game called Hotel City which was entirely in a 2D side-view.

“How about creating Trainz as a side-scroller?”

We said to ourselves that a very simplistic prototype could be made in a week, so let's try it. But if you ask me, I think that the majority of us thought that the 2D prototype would only prove that it's a dead end and we'd wind up developing it in 3D again.

But you decided to go with 2D at last, why?

We started to see the advantages of this approach during the very brief development period of the 2D prototype, and possible features that could be incorporated into the game came to mind. One of the strongest arguments in favor of the 2D approach was the feeling and atmosphere of the side-view.

Everybody remembers traveling by train when they were young, how the country unfolded from behind the window.

We thought that it'd be very easy to create the parallax effect in 2D and it really has a strong effect on people during an in-game train ride (The train ride was supposed to be the main pillar of the game at that time). We also concluded that the production time of future content is halved in 2D and that individual assets can be more detailed. And so the decision was made – TrainStation was going to be a 2D side-scroller!

How did the decision to create the game in 2D affect your work as a graphics designer?

A lot of things became a lot easier as the game is sort of a time lapse through railway history – the player starts with historical locomotives and with time gets to the present (future). The first locomotives were from the end of the 19th century and it was almost impossible to find precise source material for a high-quality 3D model.

We'd been squinting at black and white, damaged photographs full of noise in order to get as much details as possible into the game.

The decision to do the game from a side-view enabled us to make use of side-view technical drawings. 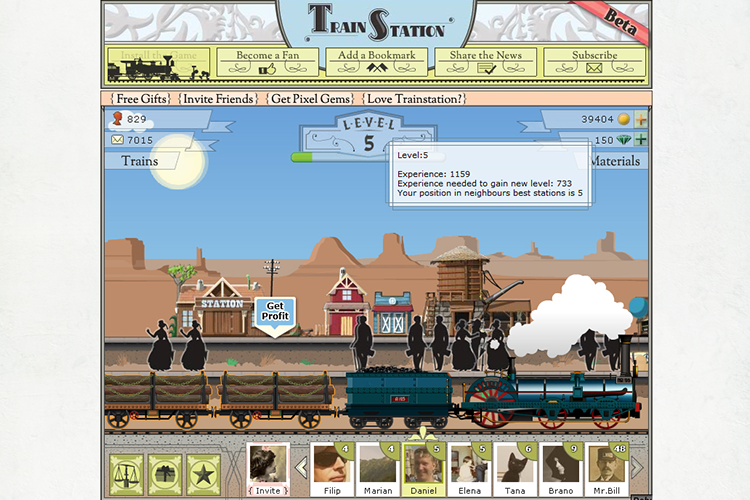 Can you think of the features and aspects of the game that were part of the initial design, but didn't make it into the game as we know it now?

Of course! For instance, we imagined that the User Interface (UI) will get modernized as the player progresses through individual railway eras (we'd been playing with the thought that we'd have the current year instead of a level index), however, this has proved to be too big of a challenge for us.

Thankfully, we managed to avoid mistakes that could render the game a failure.

For instance, the concept of a carrying capacity of wagons. Wagons should initially be rated as 3-minute, 5-minute, 30-minute , etc. and the time that it would take for a train to complete its journey would depend upon the composition of wagons... In spite the fact that I was tasked with the art side of the project, I really had to talk the designer out of it. Thankfully, he agreed that counting minutes would be a lot harder than counting bonus percentage.

Part 2 of the interview is coming soon. May your trains never be late!